What Shouldn’t Go in a Garbage Disposal: 9 Things to Remember 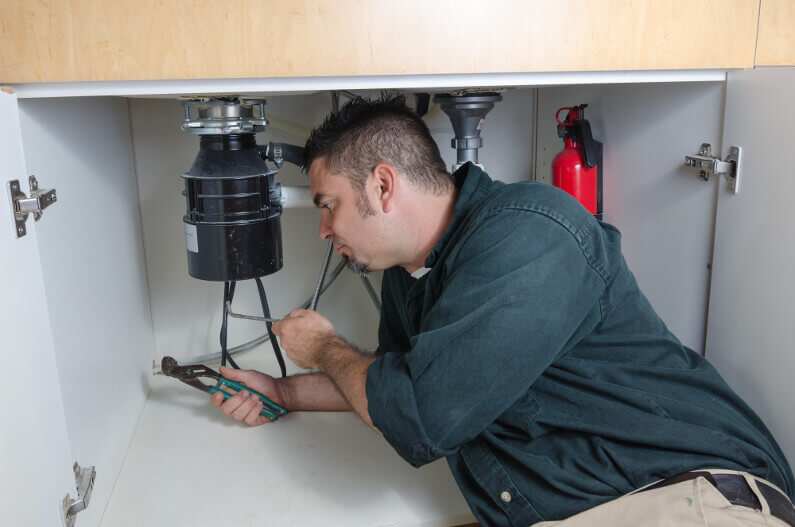 Those sharp, churning blades in your garbage disposal seem like they can cut through anything, but many food items can damage or clog the unit.

That can add up to an expensive mistake if you have to replace the unit or call a plumber to clear out clogged pipes. A new garbage disposal unit costs on average $300 with high-end units costing up to $1,500.

Knowing what shouldn’t go in a garbage disposal saves you on the pain of having a dysfunctional sink until you can get it fixed. Some items on the list are easy to understand because they’re hard or dangerous. Other items may surprise you, so it’s important to note those items to avoid an accidental clog.

That grease you just cooked with is liquid now, but once it cools, it goes back to a solid state. That hardened grease can get stuck in your pipes and create clogs.

A better option is to pour grease into an empty food container. Once it hardens, you can toss it in the trash.

You’ve probably heard that egg shells are good for sharpening your disposal blades, but they can cause problems. The lining inside the egg shell can wrap itself around the blades and gum up the disposal.

Egg shells go well in compost, so toss them in your compost bin if you have one. Or throw them in the trash.

The outer papery layer of an onion is similar to egg shells. It can also wrap itself around the blades and cause jamming issues. The inner layers of onions should be okay in the disposal.

Imagine dumping coffee grounds straight into your drain. That’s essentially what you do when you put them in a garbage disposal.

Since the grounds are already so small, the garbage disposal doesn’t do much to them. They’ll go through the system, but the grounds usually end up in the pipes. They can settle there, where they build up and eventually cause a clog.

Some food items soak up water and expand. That includes rice, bread, oatmeal, and pasta. As you run more water down the drain and the food items expand, they can clog up your plumbing.

Oatmeal, in particular, tends to cause issues. Unlike pasta and bread, which will likely get chopped up at least a little by the blades, oatmeal can easily pass through the blades with no processing. The whole mess of oatmeal can sit in the plumbing and continue expanding and causing issues until you have to call a plumber for drain cleaning and possibly garbage disposal replacement.

Anything hard, such as bones from meat or shells from seafood, puts unnecessary strain on your garbage disposal. Most units can eventually churn through the hard items and break them up at least a little bit, but the disposal will die much faster.

Like bones and shells, things such as seeds, nuts, and fruit pits are hard and can shorten the life of your disposal. They can dull the blades, which makes your unit less effective.

Large, hard items, such as the pit of peach or avocado, likely won’t break up in the disposal. A good way to decide is thinking about cutting it with a knife. You can’t easily chop up the pit with a knife, so the garbage disposal also won’t be able to cut through it easily.

Small seeds and nuts are also more difficult for the disposal to grind. They may just bounce around and eventually go through without being ground properly. If they get stuck in the drain, they can clog things up inside your plumbing.

Soft fruits and vegetables are usually safe to go in the disposal, but anything that’s hard, fibrous, or stringy can cause problems. Celery, corn husks, and asparagus are examples of vegetables that can cause issues.

The stringy fibers can become wrapped around the blades in the disposal. This affects the disposal’s performance and can block things from going down correctly.

Potato peels may not be stringy, but they’re also dangerous for your garbage disposal. The thin pieces of peel can pass by the blades and clog up the pipes instead.

Overloading your garbage disposal is a quick way to ruin the motor or wear it out faster. Break up large pieces into smaller chunks so the disposal can grind them with less work.

If you have a large bowl or pot of food to put down the disposal, add only a little at a time. If you pour everything at once, it can strain the motor.

Garbage disposals are only designed to grind up food items. Never put any non-food items into the disposal, including paper napkins or similar trash.

When emptying plates, bowls, or pans of food into the disposal, check for silverware, napkins, wrappers, and other trash first. Pull those items out and dispose of them in the trash can.

Beyond trash, avoid other non-food items, including harsh chemicals. If you want to clean the disposal, toss in a few ice cubes with some rock salt or dish soap to help clean off the interior parts.

Remember What Shouldn’t Go in a Garbage Disposal

Much of what shouldn’t go in a garbage disposal is common sense, but others seem harmless until you start noticing the sink back up. Refer to this list of restricted items if you’re unsure.