10 Reasons Why the Water in Your Bathroom is Ice Cold 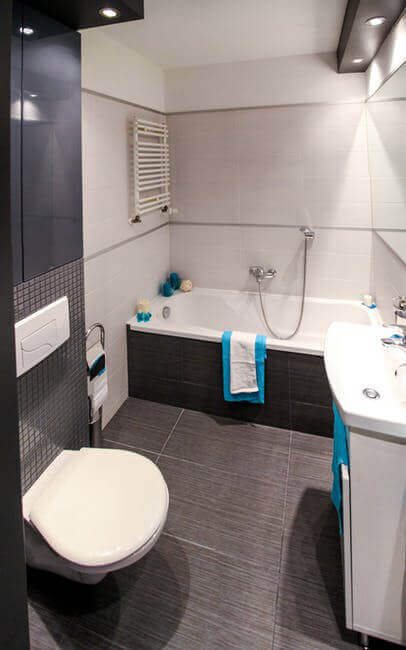 Do you dread getting into the shower each morning for fear of getting blasted with ice cold water?

While it’s an effective way to wake up quickly, most people would opt for coffee instead.

And it’s also not a situation you want to keep encountering. So what could possibly be causing this cold water dilemma?

You probably don’t give it much thought, but your shower faucet has pressure-balancing valves that not only regulate pressure but control the ratio of cold and hot water coming from the showerhead.

Corrosion and mineral buildup in the valve’s cartridge can cause the valve to cease working.

While the fix is fairly simple, you will need to be comfortable taking the faucet apart and removing the cartridge in order to replace it. If DIY plumbing isn’t your thing, call in a plumber.

2. Plumbing Issue Behind the Wall

Do you have an older house?

It’s entirely possible that you’ve got some old-school plumbing behind the wall with cross-connected pipes that perform the same function these new-fangled showerheads do. And something has gone awry.

Unfortunately, this is NOT a simple fix and you’ll need to call in the pros for this one.

If you’re getting nothing but cold water, the issue could be with your water heater.

If the light is out, follow the instructions for your model on how to relight it. While newer water heaters have ignitors, older ones may require a match.

Once the pilot light is relit, all should be good again. However, if it refuses to STAY lit, then you’re looking at a potential issue with the thermocouple.

This safety device keeps the gas from leaking out of your heater when it’s not being burned. And replacing it is definitely not a repair you should do on your own.

On the other hand, if you have an electric water heater, then you could be looking at a problem with the heating elements.

Electric water heaters have a heating element at the top and bottom of the tank. There is a thermostat for each element.

5. Too Much Pull on the Water Heater

How many people are in your house?

If one member of the family is doing laundry while another has just flipped on the dishwasher after breakfast, there’s a chance that your water heater isn’t going to be able to perform for your shower too.

Each hot water heater has a maximum capacity of hot water it can hold in its tank. And when that’s gone, it can take half an hour or more to get the new water heated again.

The only true repair for this is to get a higher-capacity water heater. Or set up a rigid schedule for when water can be used and for what. But who’s got time for that?

Hard water is chock full of minerals. That’s great for a breakfast cereal. Not so good for your faucet though.

Water with a high mineral content tends to leave some of those mineral deposits behind as it runs through your fixtures.

And since higher temperatures promote the sort of reactions that cause these deposits to accumulate, the hot water side will get more clogged than the side with cold water.

This will likely be something you notice happening gradually rather than suddenly. You may want to call your plumber to be sure that’s what’s happening, and then to see what he or she recommends.

If the water coming from the hot water tap is spluttering, you’re most likely looking at an issue with air in the water pipe.

It’s not unusual for air to get trapped in water pipes. And because it’s less dense than water, it ends up trapped in high points in the pipes.

This is referred to as an airlock and it can lead to partial or even full water blockage.

8. A Leak in Hot Water Tank

Have you noticed water around your hot water tank?

Before you go into panic mode, it could just be from condensation on the boiler. Once the tank is heated up, it will disappear.

If the tank is hot though and you’re still seeing water, then you could have an actual leak.

But if you have a newer tank, then something else might be going on. It’s best to call in a plumber.

During particularly long and cold spells in the winter, your water pipes are at risk of freezing. The pipes most likely to freeze are the ones that are closest to an outside wall. That’s why it’s a good idea to keep cupboard doors open under the kitchen or bathroom sink if they are on outer walls.

You can use a heat lamp, space heater, or hairdryer to thaw the pipe. Or buy thermostatically controlled heat tape and wrap the part of the pipe that’s affected.

If these solutions fail to remedy the problem, call a plumber. A frozen pipe is at risk of bursting.

Is your water heater set at the right temperature?

Most water heater manufacturers deem 120 degrees to be the optimal temperature to set your thermostat.

If your water is consistently cold, you may need to turn up the temperature. Just keep in mind that if you set it too high, you could end up with a scalding shower instead of an ice cold one.

And that could be even worse.

You Do Not Have to Settle for Ice Cold Showers!

Nobody should have to wake up to the shock of ice cold water every morning.

So if the water in your bathroom is running cold, it’s time to do something about it. Contact us today so we can help you troubleshoot the problem.

Then get back to hot showers.

Yes We Are Open During this Pandemic for Certain Plumbing Services. Read Our COVID-19 Safety Measures.