Gunked Up! A Homeowner’s Guide to Garbage Disposal Repair 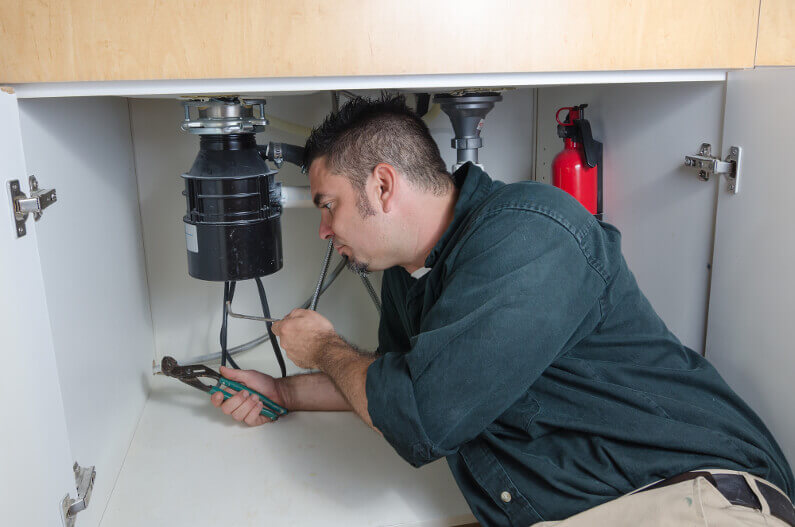 It’s not because you suddenly don’t know how to deal with food waste in the kitchen. However, if you’re used to the convenience of a disposer, your precious routine is certain to be disrupted.

The most common problems with disposals are electrical problems, jamming, clogging, and leaking. Typically, you’ll want the services of a plumber for garbage disposal repair without the hassle. Having said that, sometimes we don’t have the time to wait or we want to save some money and try to DIY.

In these situations, having the know-how to troubleshoot waste disposals in your back pocket is handy. DIY repair isn’t very difficult even if your plumbing experience amounts to diddly squat.

If things get too tough, call for professional services right away for your garbage disposal repair.

Here’s how you can deal with the common causes of disposal breakdown and possibly prevent needing garbage disposal replacement.

Did it suddenly stop mid-session and nothing happens after you flip the switch back on? If there’s no sign of life, no humming sound or anything, it means that the unit isn’t receiving any power.

See if your disposal is a plug-in type or if it has a direct connection to an electrical box. If you have a disposal unit with a plug, check that it’s actually plugged in. While this may seem like a “duh” moment, it’s one of the most commonly reported problems with appliances.

You should also test the outlet with another device, such as a phone charger, to make sure it’s working.

If it’s plugged in and the outlet is working, locate the red button found on the bottom of the device. This is the reset button which is a built-in circuit breaker that will trip if the unit is working too hard. Let the machine rest for ten minutes, then press the reset button to “un-trip” it.

You can turn the unit back on and see if that did the trick.

If there’s still no power, you might have problems with your wire connections or with the disposal unit itself. You can have an electrician inspect your wiring or it may be time to buy a new garbage disposal.

You Only Hear a Hum

If the garbage disposal makes a humming sound but doesn’t grind, you might have a jammed disposal. Keep in mind that your disposer isn’t a trashcan. It’s designed to only deal with food waste and even then, there are foods that you should avoid putting in a disposal device.

To un-jam the disposal, you must rotate the blades manually to remove the obstruction. There are two methods you can try.

The first one requires a special wrench key that came with the disposal unit or an Allen wrench. Insert the wrench into the socket that’s at the bottom of the waste disposal. Turn the hex key back and forth to rotate the blades until the foreign object or food gets dislodged.

If the garbage disposer doesn’t have the hex-shaped hole, look for a long tool such as the handle of a wooden spoon. Use that to reach the impeller through the drain hole. Again, try to rotate the blades with the tool to knock whatever’s stuck inside loose.

Then with a flashlight, look down into the disposal and use long pliers to remove any foreign object you see.

After that, press the reset button (the same red button we previously referred to). Turn on the water and try to operate the machine. You may need to repeat these steps several times to get rid of the jam completely.

You Have a Leaking Disposal

As with any equipment connected to plumbing, leaks can and do happen. Common areas of leaks include the sink flange, the dishwasher hose, or the discharge drainpipe.

Fixing a leak is pretty straightforward. If you notice a leak, pinpoint the source, then tighten the connection.

It Works but Draining Is Slow

Clogging is the usual culprit if you have a slow-draining garbage disposal. The location where you’ll frequently discover clogging is inside the p-trap of the drainage connection.

Use water pump pliers to loosen the slip-nut that connects the discharge pipe to the disposal. Make sure that you place a bucket underneath the pipe to catch any wastewater that may pour out. Disassemble the drain trap and the discharge pipe and check for clogs.

Clean out the food waste that’s causing the clogging. Re-assemble the drain trap and the discharge pipe and re-connect them to the disposal.

Test if the clog is cleared by turning on the disposal and running water. If it still drains slow, the clog may be further down the plumbing and it’s better to call a professional to deal with it.

You’ve probably heard “prevention is better than cure” a million times before. It’s worth repeating because, with some cleaning and maintenance, you won’t be troubled by jamming and clogging with your garbage disposal.

Every month, use a mixture of vinegar, baking soda, and hot water to clean the waste disposer. Let it settle for about 5 minutes then run cold water and turn on the device.

To keep the blades sharp, grind a cup of ice cubes once every one or two weeks. You can also add some lemon peels to keep it smelling fresh and clean.

Were You Successful? If Not, We’ve Got You Covered!

Garbage disposal repair is definitely worth an attempt at least. You don’t have to worry about making things worse and you might surprise yourself by actually fixing the problem.

However, life isn’t always that simple and if you think it’s too much for you, we’re here to help!